Between 1860 and 1880 Milang was one of South Australia’s busiest ports, connecting Adelaide, which was only 47 miles (87 km) away, with the thriving river trade which reached into the heart of the three Eastern colonies.

Wool from the Darling and Upper Murray stations was landed at Milang and then transported by horse and bullock teams to Port Adelaide. Wheat was transported to Milang, processed at its flour mills and then shipped back as flour. 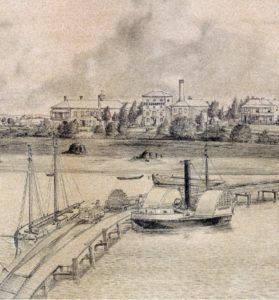 Foreign goods shipped into Adelaide were then exported to Victoria and New South Wales through Milang, making over half of the Colony’s total exports between 1868 – 1872.

The illustration on the right shows what Milang was like in the late 19th century.  It is taken from a drawing by J. Kopp which hangs in the Milang Institute.  Unfortunately the impressive group of Landseer buildings were demolished about sixty years ago and replaced by the present shopping centre.

This site uses Akismet to reduce spam. Learn how your comment data is processed.